After last weeks big drama and a couple of ruined canvases I have decided to test a few things to see if I can work out where the problem lies.

My first thought was that the white paint I used for last weeks pour was the culprit as this was the biggest change. Normally I use Global Acrylic White and just dilute it with a bit of water. For the failed pours I had used the white ceiling paint that I had found in my shed. I know of other Artists who have successfully used house paint in their pours and thought that I can try that too. But apparently ceiling paint is different to house paint. It is missing its elasticity.

I used my normal other prepared Global paint in the primary colours red, blue and yellow and did a flip cup pour on a small test canvas that was prepared with a layer of the white prepared ceiling paint.

Here is the result of that pour 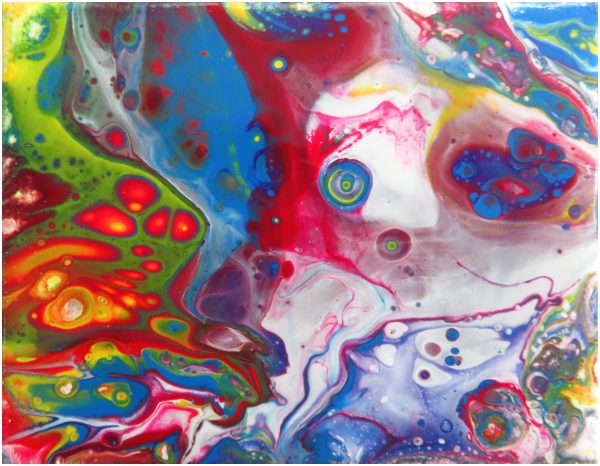 There were some small cells developing but not what I was hoping for.

For the second test with this ceiling paint I added PVA glue that was diluted in a ratio 1/3 water to 2/3 PVA to the ceiling paint. (also in a 1 to 3 ratio)

I also used my normal other prepared Global paint in the primary colours red, blue and yellow and did another flip cup pour on a small test canvas that was prepared with a layer of the white paint and PVA mixture.

Here is the result of that pour 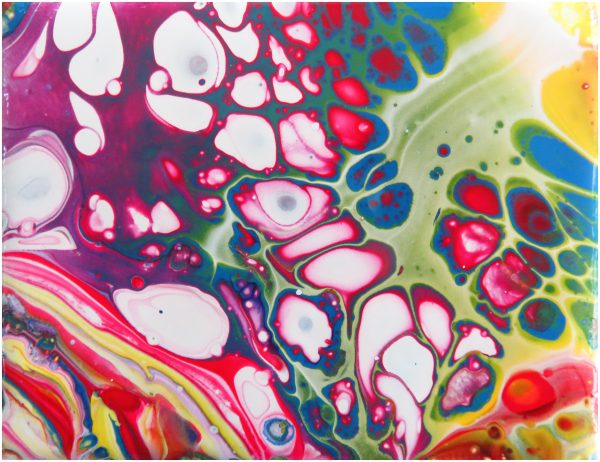 Surprisingly the cells are very well defined and rather big. I had never used PVA as a flowing medium before and this was a pleasant surprise for me.