For so long I wanted to run a demonstration about fluid acrylic painting with my group, but since I don’t have an indoor studio, but only a roof over a beautiful outdoor area, we had to wait for the temperatures to drop under 30 degree during our hot australian summer. Somehow fluid acrylic pouring doesn’t go well when the temperature rises over 30 degree.

Finally last week the temperature dropped to a cool 28dgree and we used the opportunity to get together for some acrylic pouring. As it was a demonstration, and not a workshop I provided all necessary equipment like the paint, the dimethicone and th floetrol. 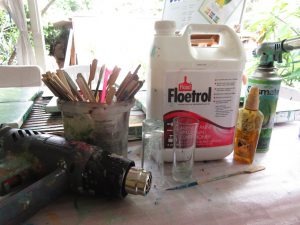 I showed the girls how I do mix my colours. I premix my ‘Global Acrylic’ paint half and half with floetrol and store it in an airtight glass container. This way is will keep for many months to come. 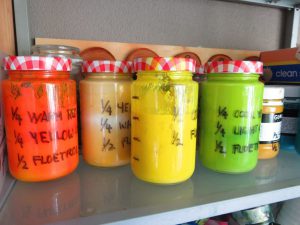 For this demonstration I used some paint I had mixed about 2 months previously but had it stored in the fridge as I was worried that the QLD summer heat would destroy it very fast. I had no idea if the paint would still produce cells or if it would just be a big flop. 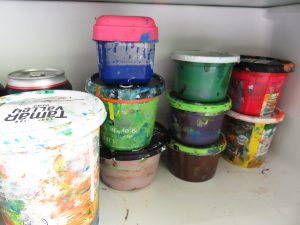 Some of the paint had thickened over that period so I could show how much water was needed to get to the right consistency. I usually add water until the run off does not form small mountains in the mixing cup. As I also didn’t know if the dimethicone still would work after this time, so I added a few drops of it into the paint/floetrol/water mix and just stirred it in gently with the broad end of skewer that I usually save after a delicious prawn skewer BBQ.

I had a large container full of mixed white with no dimethicone, several small containers with different greens and blues, including some browns and one violet paint colour mix left over.

Firstly I wanted to show a dirty pour flip cup on a 20cm x 20cm stretched canvas.  For this size of a canvas I use a large shot glass full of paint that I layered in no special order but started with some white. For this kind of pour the canvas is placed upside down onto the full glass of paint and then turned over and placed onto the table. Then the glass is swiftly lifted up and the paint spreads over the canvas and surprisingly we still got cells in this pour. The canvas is then lifted and gently moved so the paint can spread all over the canvas to increase the size of the cells and runs down over the canvas edge. A heatguns is used to pop and air bubbles in the pour and add extra cells to the finish the painting. 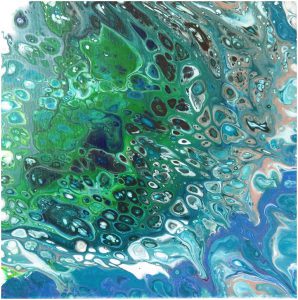 The second demonstration was a dirty pour but not as a flip cup. Instead the paint is again layered in different colours  into a shot glass and then quickly poured over the canvas in a swift movement. It still is tilted to move the paint across the canvas and torched to produce more cells and remove any air bubbles. 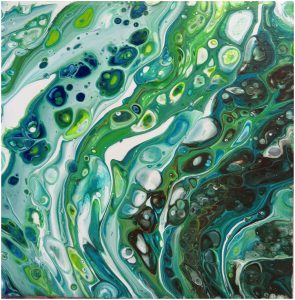 The third demonstration was a swipe, where the different colours of paint is poured separately across the canvas until the canvas is covered. A cover colour is then poured on top of the canvas and a sweeping tool is used to swipe the cover colour over all the other layers of colours. The swiping colour in this example was white, but it could be any colour. 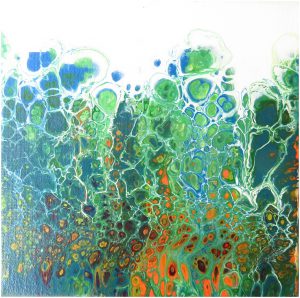 After that it was the students turn to try.  All three participants used the dirty pouring cup in their first go. The very first cup was filled with the same layers of blue and greens as I have used but when Pam poured the paint over the canvas, she didn’t use enough  speed but slowly let it drip from quite a high level which resulted in thin stripes of paint flowing over the canvas and  it was hard to move the paint so it would join and cover the surface. But the result was still interesting enough to be a keeper. 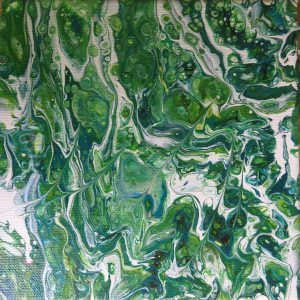 Pat tried a negative pour were often the two sides are only covered in a single colour paint, white in this case. As there was a bit too much paint in th pouring cup, all the paint ran over one side of the canvas but the other side managed to stay free as it should be in a negative space pouring 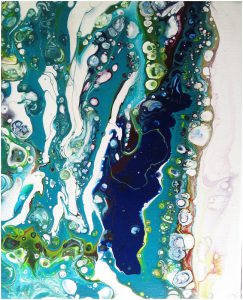 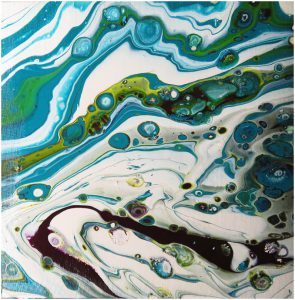